We explain what a chemical reaction is, the types that exist, their speed and other characteristics. Also, physical and chemical changes.

What is a chemical reaction?

Every chemical reaction subjects matter to a chemical transformation, altering its structure and molecular composition (unlike physical changes that only affect its form or state of aggregation). Chemical changes generally produce new substances, different from the ones we had at the beginning.

Chemical reactions can occur spontaneously in nature (without human intervention), or they can also be generated by humans in a laboratory under controlled conditions.

Many of the materials that we use on a daily basis are obtained industrially from simpler substances combined through one or more chemical reactions.

Physical and chemical changes in matter

Physical changes in matter are those that alter its shape without changing its composition., that is, without modifying the type of substance in question.

These changes have to do with changes in the state of aggregation of matter (solid, liquid, gaseous) and other physical properties (color, density, magnetism, etc.).

Physical changes are usually reversible since they alter the shape or state of matter, but not its composition. For example, by boiling water we can turn a liquid into a gas, but the resulting vapor is still made up of water molecules. If we freeze the water, it goes to the solid state but it is still chemically the same substance.

Chemical changes alter the distribution and bonding of the atoms Of the mattery, achieving that they are combined in a different way, thus obtaining substances different from the initial ones, although always in the same proportion, since matter cannot be created or destroyed, only transformed.

For example, if we react water (H2O) and potassium (K), we will obtain two new substances: potassium hydroxide (KOH) and hydrogen (H2). This is a reaction that normally releases a lot of energy and is therefore very dangerous.

Characteristics of a chemical reaction

Chemical reactions are generally irreversible processes, that is, involve the formation or destruction of chemical bonds between the molecules of the reactants, generating a loss or gain of energy.

In a chemical reaction, matter is deeply transformed, although sometimes this recomposition cannot be seen with the naked eye. Still, the proportions of the reactants can be measured, which is dealt with by stoichiometry.

On the other hand, chemical reactions generate certain products depending on the nature of the reactants, but also on the conditions in which the reaction occurs.

Another important issue in chemical reactions is the speed at which they occur, since controlling their speed is essential for their use in industry, medicine, etc. In this sense, there are methods to increase or decrease the speed of a chemical reaction.

An example is the use of catalysts, substances that increase the speed of chemical reactions. These substances do not take part in the reactions, they only control the rate at which they occur. There are also substances called inhibitors, which are used in the same way but cause the opposite effect, that is, they slow down reactions.

How is a chemical reaction represented?

Chemical reactions are represented by chemical equations, that is, formulas in which the participating reagents and the products obtained are described, often indicating certain conditions inherent to the reaction, such as the presence of heat, catalysts, light, etc.

The first chemical equation in history was written in 1615 by Jean Begin, in one of the earliest treatises on chemistry, the Tyrocinium Chymicum. Today they are of common teaching and thanks to them we can more easily visualize what is happening in a certain reaction.

The general way to represent a chemical equation is:

Types and examples of chemical reactions 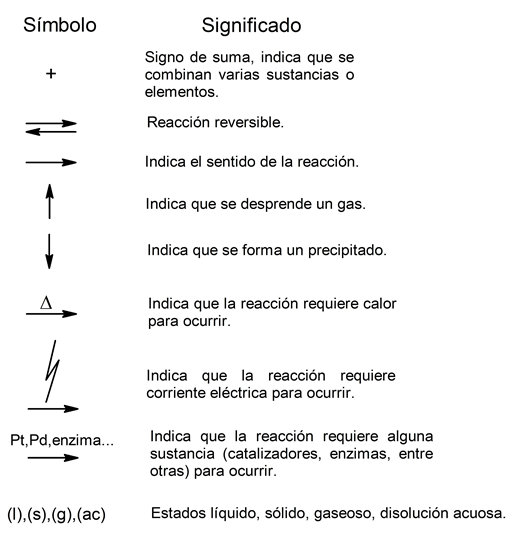 Inorganic reactions. They involve inorganic compounds, and can be classified as follows:

Organic reactions. They involve organic compounds, which are those that are related to the basis of life. They depend on the type of organic compound for their classification, since each functional group has a range of specific reactions. For example, alkanes, alkenes, alkynes, alcohols, ketones, aldehydes, ethers, esters, nitriles, etc.

Some examples of reactions of organic compounds are:

Chemical reactions are fundamental to the existence and understanding of the world as we know it. The changes that matter undergoes under natural or man-made conditions (and often generating valuable materials) are just one example. The greatest evidence of the importance of chemical reactions is life itself, in all its expressions.

The existence of living beings of all kinds is only possible thanks to the reaction capacity of matter, which allowed the earliest cellular forms of life to exchange energy with their environment through metabolic pathways, that is, through sequences of chemical reactions that yielded more useful energy than they consumed.

For example, in our daily life, respiration is composed of multiple chemical reactions, which are also present in the photosynthesis of plants.

Speed ​​of a chemical reaction

Chemical reactions require a stipulated time to occur, which varies depending on the nature of the reagents and the environment in which the reaction occurs.

Factors that affect the rate of chemical reactions are generally: