We explain what the food pyramid is, its function, how it was created, and what food group each step represents.

What is the food pyramid?

It is known as the food pyramid, nutritional pyramid, food pyramid or other similar names, a a graphic model of which are the foods that we should consume daily and in what proportions to keep us healthy.

As its name indicates, it is a pyramid or triangle segmented into five or six hierarchical links, ordered from the base to the top, in each of which a certain type of food substance is represented. Each step has a different size, to indicate the proportions in which food should be consumed, to maintain a diet that equally satisfies all the needs of the body.

Food pyramids can vary depending on the accepted model in each country, especially when they are adapted to the foods present in their diet and their gastronomic culture; but in general they obey the same nutritional principle that establishes a daily intake of 55% carbohydrates, 30% fat and 15% protein, fiber, vitamins and minerals, as the ideal proportion recommended for humans.

Each of these food groups is usually represented with a specific color, a specific drawing, or simply noted on its corresponding rung of the pyramid, and often accompanied by the portions that its size represents.

The first nutritional pyramids were created at the end of the 19th century, but perhaps the best known of all was created in the United States by the Department of Agriculture in 1992, and which was later revised and reformulated in 2005 (under the name “My Pyramid: steps to a healthier you“, That is,” My pyramid: steps to make you healthier “), in order to incorporate the need for physical exercise as part of the daily routine.

There are, of course, alternative versions of this pyramid, adapted to the Mediterranean diet, to the Arab and Jewish ways of eating, and even a vegan nutritional pyramid. There are also other graphic formats to display the same information, such as the food wheel.

According to the food pyramid of the Spanish Foundation for Community Nutrition, the suggested proportion of foods would be as follows: 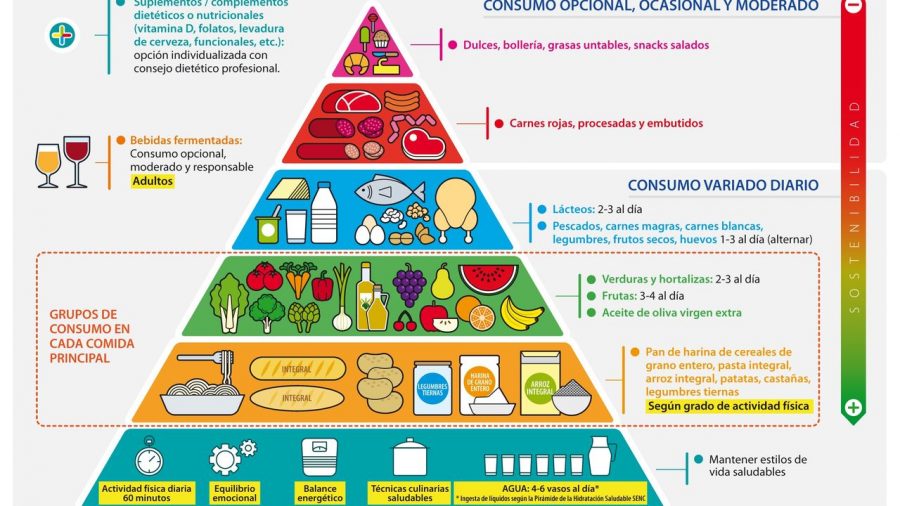 See also  Lumbersexual - Concept and characteristics of this fashion

What’s more, daily intake of 4-6 glasses of water is recommended, as well as supplements and / or vitamin or nutritional supplements according to the specialized guide of a nutritionist, if applicable.