We explain what meiosis is and what each of its phases consists of. Also, what is mitosis and its differences from meiosis.

Meiosis is called one of the ways cells divide, which is characterized by giving rise to daughter cells that are genetically different from the cell that originated them. This type of cell division is key to sexual reproduction, since through meiosis organisms produce their gametes or sex cells. The new individual resulting from the union of two gametes (one male and one female) will have a different genetic material from that of the parents, which arises from the combination of these.

In animals (including humans) most of the body’s cells are diploid and are called somatic cells. Only in the germinal tissue are special cells that give rise, through meiosis, to haploid cells. These haploid cells are the gametes or reproductive cells that are involved in sexual reproduction, that is, they are the sperm (male gametes) and the ovules (female gametes).

When a sperm and an egg fuse with each other during fertilization, each of them contributes half of the genetic load of the new individual that is formed as a result of this union. Thus, both haploid sets of each gamete combine to form a complete diploid set, which is the genome of the newly formed individual.

See also  Species - What is it, concept, types, origin and examples

Meiosis is a essential process prior to sexual reproduction, since during this process the gametes are formed. However, meiosis is also part of complex life cycles in algae, fungi and other simple eukaryotes, to achieve a certain generational alternation, reproducing their cells in a sexual and asexual way in different stages.

Meiosis It was discovered in the 19th century by the German biologist Oscar Hertwig (1849-1922), from his studies with sea urchin eggs. Since then, successive investigations have contributed to understand this process in greater depth and to understand its vital importance in the evolution of higher forms of life.

Meiosis is a complex process that involves two distinct phases: meiosis I and meiosis II. Each of them is composed of several stages: prophase, metaphase, anaphase and telophase. This warrants a more detailed study: 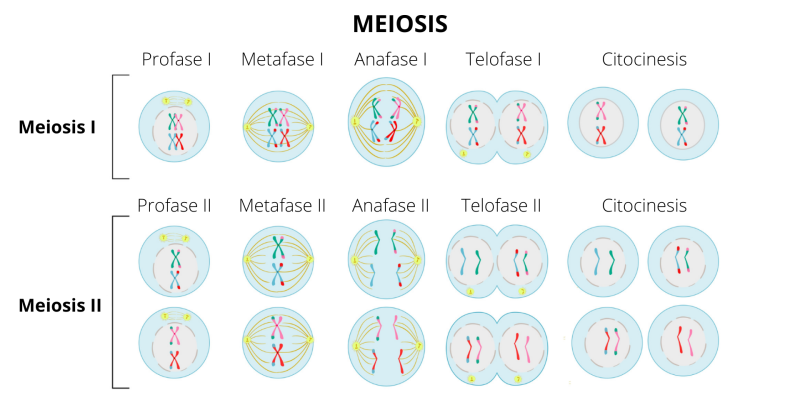 The differences between mitosis and meiosis are several: